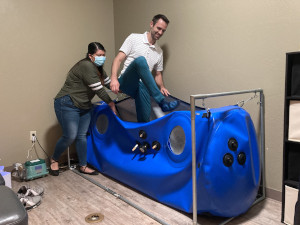 Parkinson’s Disease is a neurodegenerative disorder that targets dopaminergic neurons in a part of the brain called the substantia nigra: a crescent-shaped area near the brainstem. Symptoms include tremor, rigidity, bradykinesia (slow movement) and a festinating gait. In addition, patients frequently experience sleep disorders, depression and anxiety (Xu et al., 2017).

Pharmacotherapy includes two drugs, levodopa (also known as L-dopa) and carbidopa, to reduce physical symptoms. Unfortunately these medications are not effective for all patients, and even those who benefit may develop a tolerance over time that makes them less effective. In addition, medications listed above do not address the affective disorders and cognitive decline that develop during the disease process.

Converging evidence from case studies and preclinical trials indicate that hyperbaric oxygen therapy can ameliorate both physical and cognitive symptoms of Parkinson’s. Hyperbaric oxygen therapy has been around for many years, first used as a treatment for decompression syndrome and carbon monoxide poisoning. The concept is simple: the patient inhales pure oxygen in a pressurized chamber for 60-90 minutes. Pure oxygen is five times as concentrated as what exists in the sea-level atmosphere. By pressurizing the cabin, the oxygen can be absorbed into the patient’s blood plasma. The circulatory system carries the oxygen enriched plasma to damaged tissue, where it exerts its therapeutic effects (Schaefer, 1992). 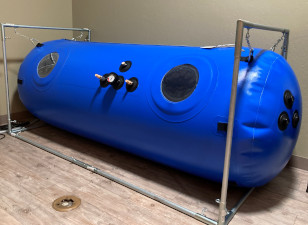 In the case of Parkinsonism, researchers believe that the oxygen improves oxidative (aerobic) metabolism within the mitochondria of the dopaminergic neurons, preventing apoptotic cell death. Mitochondria are known as the “powerhouses” of the cell because they metabolize blood sugar to produce adenosine triphosphate (ATP), which the body uses as energy. Mitochondria also have important signalling functions.

Two preclinical studies support this hypothesis. In the first study, a group of Japanese researchers exposed mice treated with drugs to induce Parkinson’s Disease to 45% oxygen in a hyperbaric chamber. Compared to a control group, the mice treated with hyperbaric oxygen therapy demonstrated improved motor function. In addition, post-mortem exams indicated that fewer dopaminergic neurons had been lost in the treatment group than the control group (Kusuda et al., 2017).

A second animal study treated mice with Parkinsonism with a combination of levodopa and hyperbaric oxygen therapy. Researchers theorized that the combination therapy reduced oxidative stress in the substantia nigra, protecting the neurons against apoptosis (programmed cell death) (Pan et al., 2015). Researchers found that both the mice treated with levodopa as well as those treated with levodopa plus hyperbaric oxygen therapy exhibited better movement coordination than the control group. Post-mortem examination confirmed that hyperbaric oxygen therapy had protected neurons in the substantia nigra against oxidative stress and hence cell death (Pan et al., 2015). 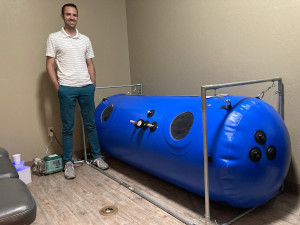 In a case study, physicians treated a 45-year old patient with Parkinsonism with hyperbaric oxygen therapy as an alternative to traditional pharmacotherapy (Xu et al., 2017). Prior to treatment, the patient’s symptoms included resting tremor and bradykinesia, severe depression and anxiety. The patient had refused pharmacological agents on multiple occasions, and as a result, symptom burden was worsening. The patient had lost a significant amount of weight, and sleep was limited to 2-3 hours per day (Xu et al., 2017).

Physical functioning improved as well, with the patient no longer requiring assistance to perform activities of daily living (ADLs) by the end of treatment (Xu et al., 2017).


There are two types of hyperbaric chambers: large multiplace chambers that hold eight patients and an overseer, and monoplace chambers that hold a single patient (Schaefer, 1992). The former are more common in tertiary care facilities (hospitals), while most outpatient clinics use the single chambers (Tibbles & Edelsberg, 1996). Physicians have determined that treatments lasting up to two hours at pressures up to 3 atmospheres are safe and effective (Tibbles & Edelsberg, 1996). A typical treatment lasts between 45 and 90 minutes, not including 15 minutes to pressurize the chamber at the start and 15 to depressurize at the end (Schaefer, 1992).

Similar to being on an airplane, some patients may feel pressure inside of their ear canals during pressurization and depressurization. Clearing the ears should prevent any discomfort. The machine makes some noise, but most individuals are comfortable reading and relaxing inside the chamber. An intercom enables the person inside the chamber to communicate with his or her provider.