Most runners recognize the need to strength train in order to improve their performance. Unfortunately, a lot of the exercises they do aren’t very effective. In order for strength training to have an impact on running performance, it needs to improve the ways in which groups of muscles function in the running environment.

It is helpful to think about muscles in terms of what Dr. Vladimir Janda called “fascial slings,:” groups of muscles that work together to create different types of movement. Rather than training running muscles in isolation, it is more productive to train them in groups. (Page, Frank & Lardner, 2010). Putting these two ideas together, the most effective strength training for runners incorporates fascial slings in running specific movements, beginning with the anatomical drivers (e.g. the feet).

Therefore exercises to improve the way the feet function for runners need to focus on strength, power and balance.


The purpose of this exercise is to learn what the correct anatomical position of the foot’s two arches (metatarsal and longitudinal) feel like, so the foot muscles can learn to maintain these positions while running. Therefore, this exercise involves both passive and active motion. The passive phase begins with the runner seated, and knees flexed slightly. The therapist uses one hand to cup the heel of the foot and the other to manipulate the longitudinal arch into the anatomically correct position. Both the metatarsals and toes should be relaxed and flat on the floor. The athlete then uses the foot muscles to engage, relax and re-engage this position.


This exercise begins in a seated position, then progresses to standing and then standing on one foot. In the seated position, raise the big toes off the ground while keeping the other four toes flat on the floor. Repeat this movement ten times. Then raise the other four toes on each foot off the floor while keeping the big toes flat. Having mastered this exercise seated, progress to repeating these movements in a standing position. Doing so makes it impossible to compensate for weakness in the foot muscles by abducting and adducting the lower legs. Finally, perform the exercise in a single leg stance position to combine strengthening with balance.


This exercise can be performed seated or standing. Position a small towel flat on the floor in front of the toes. Use the toes to grab the towel and move it towards the back of the foot. This exercise strengthens the flexor hallucis longus and flexor digitorum muscles used to curl the toes.


Begin this exercise in the static (standing position). Standing with bare feet flat on the floor and shoulder width apart, raise the heels slowly off the floor and return to the starting position. Repeat ten times. Having mastered this exercise, try the same movement on each foot in a single leg stance position. Both the two-foot and single-leg stance versions of the heel raise also provide a good challenge to balance.

To make this exercise dynamic, begin in the single leg stance lifting one heel off the floor; then lower the heel down while stepping forward on the opposite foot. Use the arms to counter-balance. Drive the knee of the swing leg up with each heel raise to activate the gluteus muscles.

Finally, transition from a march to a skipping motion to engage all of the lower extremity muscles.

Video: Mechano and Proprioception In Knee


Losing proprioception is part of the aging process that most runners are blissfully unaware of. The average sedentary 30 year-old should be able to balance on one leg for 45 seconds. By age 60, the average time decreases to 32 seconds and by age 70, 21.5 seconds. (Springer et al, 2007). It goes without saying that this loss of balance affects running efficiency and performance.

While we can’t reverse the aging process, it is possible to work on balance, beginning with static single-leg stance exercises and progressing to dynamic movement. Runners should have a goal of maintaining a single-leg stance on each foot for a minute (eyes open). In addition to working on balance, this is a good opportunity to think about posture: pelvis in neutral position, shoulders down and relaxed. Be aware of any rolling in of the shoulders. The head, ears and shoulders should be in alignment when viewed from the side.

Single Leg Stance on Unstable Surfaces: Increase the challenge by performing the single leg stance on a variety of unstable surfaces such as a BOSU ball, foam pad or vibration board. 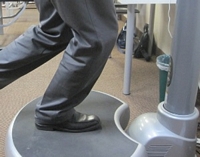 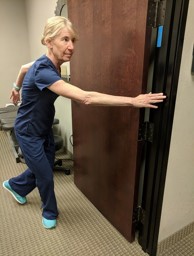 Nose to the Wall: Stand about a foot away from a wall with the stance leg slightly bent. Using the other leg to counterbalance, move your nose as close to the wall as possible. The trick here is to avoid hinging forward at the waist: with the exception of the knee, the leg, torso, head and neck should remain in alignment. Repeat this exercise ten times on each leg.

Be careful not to “cheat” this exercise by bringing the foot up to the lateral side of the knee. The idea is to drive the knee up and forward and let the foot follow. Repeat this motion ten times on each leg for a set.

Lateral Toe Touch: Although running is primarily a sagittal movement, it does involve a certain amount of side-to-side motion. It’s important to strengthen the gluteus minimus and medius muscles to maintain stability and balance during turns, and also to keep the pelvis stable during the running motion.

For this exercise, build up aerobic steps to create a one-foot tall platform. Standing in the middle of the platform, lift one foot off the ground and reach out to the side, touching your toes to the ground. Come back to the starting position and repeat ten times on each side for a set.

Holding a light kettlebell by the handle with both hands at about chest height, twist to the left, come back to center and then twist to the right. Twist to each side ten times for a set. 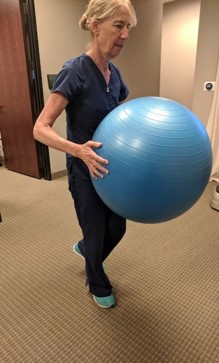 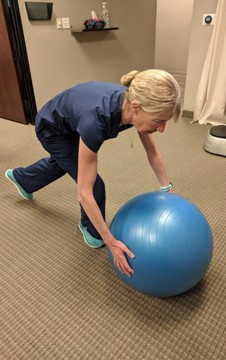 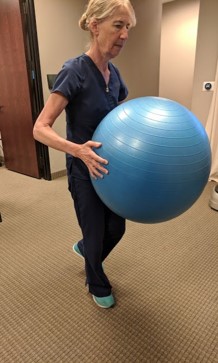 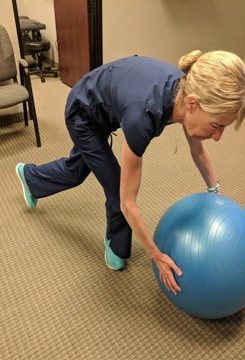 
The gluteus maximus is the biggest, strongest muscle in the human body. While the quadriceps are the prime movers for walking, the gluteus muscles should be the prime movers for running. Unfortunately, many slower runners tend to favor the quadriceps. At some point, the glutes shut down, translating to inefficient running form. Performing traditional squats and lunges will make the glutes stronger, but not necessarily in the running environment. Try the following glute activation exercises instead.

Sliders: To perform this exercise, you will need some inexpensive furniture moving pads. Position one foot on the top side of the pad (slick side down). Using your arms to counterbalance, move the foot straight back while bending the knee of the opposite leg. Return to the starting position and repeat ten times on each foot for a set.

Step-ups: Perform this exercise on a one-foot tall step or aerobic platform. With your right leg, step onto the step, then lift the left foot off the floor and drive that knee straight up. Bring the left leg back down to the floor and return the right foot to the starting position. Repeat this exercise ten times on each side for a set. 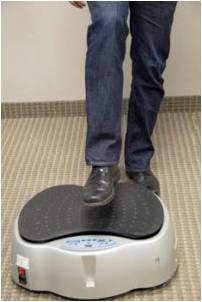 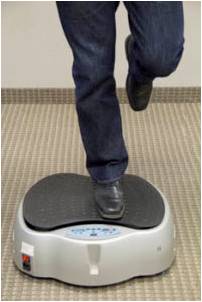 Bridging on an Exercise Ball: Performing a simple glute bridge on an exercise ball forces you to engage the core abdominal muscles as well. Begin with two feet on the ground shoulder width apart. Increase the challenge by bringing the feet together and progress to a single-leg stance. 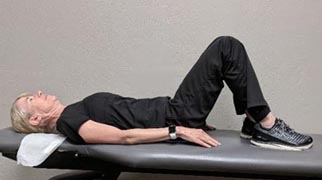 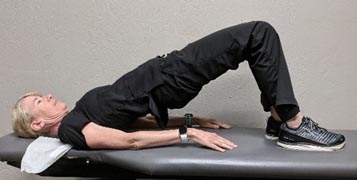 Side plank: Lie on one side on an exercise mat. With the legs straight and feet together, raise the hips off the floor. Be careful to keep the spine in alignment. Maintain this posture for 60 seconds on each side for a set. 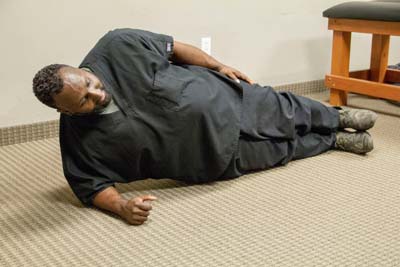 Leg circles: This is a good way to engage the lateral gluteal muscles. Lie on an exercise mat on one side. Lift one leg in the air. Keeping that leg straight, make small circles first in one direction and then the other. A lot of people cheat this exercise by making triangles rather than circles, or big circles rather than small ones. Form is very important.


Having a strong core is a good injury prevention strategy, particularly for athletes who are training for long distance events. As the legs begin to tire, the core muscles function to keep the body in alignment and contribute to maintaining a more efficient form.

Plank on the Ball: Performing a basic plank on an exercise ball is a good way to practice engaging all of the core muscles, including the glutes, abdominals, and scapular stabilizers. Form is very important here: make sure that the pelvis is aligned with the knees and shoulders. 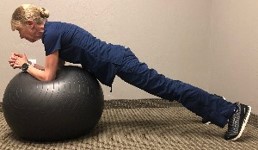 Don’t hunch the shoulders: doing so over activates the upper trapezius muscles and neglects the scapular stabilizers.

Mountain Climber: Begin with the basic plank position on the exercise ball. Combine this with the mountain climber exercise, alternating legs and driving each knee forward, touching the ball with the knee and bringing it back to the starting position. Touch the ball with each knee ten times for a set. 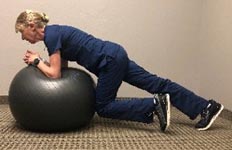 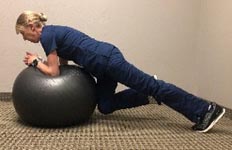 
Cable Row: This exercise engages the scapular stabilizers. Tie an exercise cable to a railing or doorknob. Grab one end of the cable in each hand. Keeping the shoulders down and elbows close to the body, pull the cable handles straight back in a rowing motion. If you perform this exercise correctly, the hands should be between the waist and hips, similar to their position when you run. Repeat the rowing motion ten times for a set. 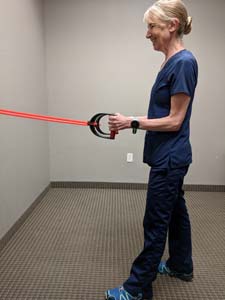 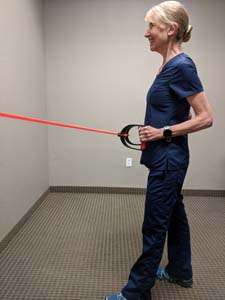 FlexBar Exercises: TheraBand FlexBars are a great way to build arm strength for running. The FlexBars come in different tensions, designated by different widths and colors. A basic exercise is to shake the FlexBar back and forth with the arm extended. Use the FlexBar to perform woodchopper movements, or as an add-on to other exercises listed above (e.g. substitute for the kettlebell in the kettlebell twist). You can also use them to challenge the arms (and coordination) in walking lunges. 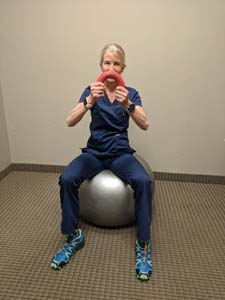 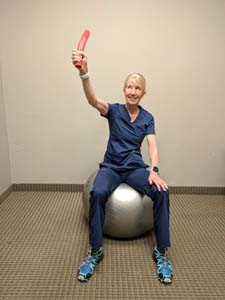 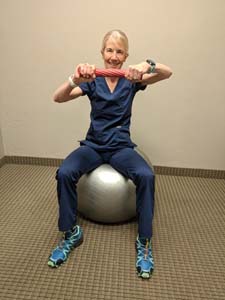