Scar tissue is used in the body whenever it needs a patch; think of it like the body’s duct tape. The stuff is great, it can be used anywhere to patch and hold things together until the body has time to fix it properly. 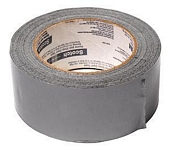 Ever have a leaky pipe? Apply a little duct tape and the leak stops. I’m sure you would fix it immediately, but some of us would choose to duct tape it until the weekend. By the time the weekend rolls around I have forgotten about my duct tape patch. A few months later I might notice a little more water and quickly add another layer of tape. Over the course of a year I end up with a big patch of tape wrapped around the pipe.

From the outside it looks like the tape is holding, but is it really structurally stable? Why did I end up needing 10 layers of duct tape then? Our body uses duct tape called scar tissue to put quick fixes on problems. We can picture the white scars where the skin was patched together. The scar does not look or act the same as normal skin, because it is not made of the same stuff.

Around muscles, tendons, and ligaments scar tissue is used in the same way. The body throws down a little scar tissue for support during an injury to help get through the injury. However sometimes the body forgets to go back and replace scar tissue with good, strong tissue. Since scar tissue is structurally weaker, next time you challenge that area the scar tissue becomes aggravated. Your body then places more “duct tape” on top of the scar, eventually leading to a larger patch of scar tissue.

Accumulation of scar tissue can lead to chronic pain, injury, and/or limitation. Whenever someone says, “If I always do something for this amount of time I develop pain right here,” then we usually find scar tissue as one of the sources of pain. It may occur with lifting in the low back, or neck pain with computer work. People who point to “knots” in their shoulders and say, “It always hurts right here after two hours on the computer,” or “my headaches start in the muscles and move toward my eye,” are describing aggravated scar tissue patches.

As much as I love duct tape, we all know it has a purpose and limitation. Eventually we need to remove the duct tape and fix the area correctly. In the body it is a little more difficult to break up scar tissue. We need to find ways to tear up some of the tape and get the body to recognize the “bad patch” and replace it with good tissue. On the next visit we break up more scar tissue. We continue this process until the body fixes the original problem and pain source.

After treatment with neck and trapezius scar tissue, people report less fatigue and pain with computer work. They find themselves working longer before experiencing the dull muscle ache. At first they may feel discomfort after two hours of work that steadily increases during the work day. With treatment the onset of pain occurs later in the day and the overall intensity decreases. Eventually people describe pain free workdays, and only experience pain with excessive activity. As the scar tissue patch gets smaller, the muscles can perform more work before aggravating the smaller scar tissue patches.

Scar tissue is a chronic source of pain and limitation in people. Some situations require treatment to help break up scar tissue and trigger the body’s normal healing. Duct tape just isn’t a long term solution.

More information on scar tissue and treatment can be found on: